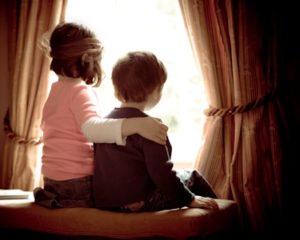 I read a fascinating book called ‘The Science of Love and Betrayal’ by Robin Dunbar, all about why people fall in love, is there any scientific or logical reason for this, and does it actually help the development of the human race? It appears not, we do not actually need to fall in love to produce or even raise children, what women really need evidently is a supportive mother/grandmother figure and a few other friends.  As we can produce children without committing to a partner for life, why do we? It seems that humanity has always fallen in and out of love, formed close relationships and spent a good number of years together rearing infants. The book does not really explain why people fall in love or more importantly for my profession why people fall out of love. But they certainly do and it can cause immense pain for the parties and have a massive impact on the children. The child’s dilemma is that while their parents are falling out of love the children generally remain steadfastly in love with both parents. This situation was illustrated for me by a passage in a book where a boy is describing his father leaving his mother. His father had to come back for some items out of the shed a week later. The boy saw that his car was parked by the shed and his mother ran out to try and stop or shout at his dad. The boy positioned himself by the tailgate of the car hoping that his father would think that he was there to help him and his mother would think that he was there to stop his father leaving. To me this summed up the child’s dilemma, the impossible position children are placed in when parents separate. They love both parents, are loyal to both parents and so do not know how to behave. Parents have got to accept that the children do love both parents and so are caught in a dilemma when they separate. They may feel sorry for one parent or that their feelings of love for the other parent are somehow “wrong”. Both parents need to be aware of this and need to reassure the children that it is perfectly ok for them to love and talk about the other parent. Both parents need to allow the children to speak about the other parent in positive terms and to talk through these dilemmas. They need to know that the separation is not their fault and that they are “allowed” to show affection to both parents in either’s presence. Caught in the middle? Parents also need to consider the example they are setting to their children about relationships and how to treat one another; scenes of angry or messy relationships can have lasting detrimental effects upon a child’s outlook of such situations and may result in damaging the child’s future relationships. So falling in and out of love is what we do – we just need to be mindful of the children in the middle. For more information or to discuss further please contact Nicky Gough on 07711 527968 or email info@cotswoldmediation.com.
By Joanna CraigBlogdivorce advice for men and women, divorce and the effects on children, how divorce affects children, how does divorce affect children, how to treat your children during divorce, mediation services warwickshireComments Off
Read more...